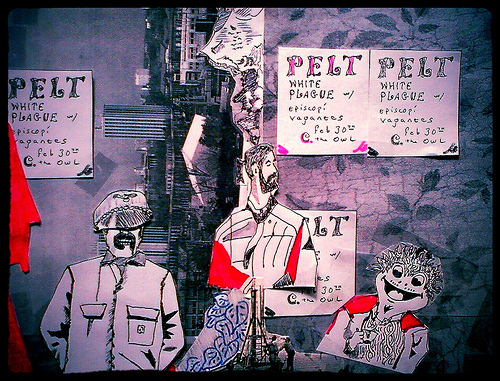 .. and central to the Richmond narrative is PELT: "Pelt spawned any number of side-projects and solo careers, including bluegrass group the Black Twig Pickers, raga-drone ensemble the Spiral Joy Band, and the solo career of the late, great Jack Rose" (Nailgunmedia).  And between these formations (bands?) is surprising continuity: Pelt songs being revived for BTP records, the .. prefiguring of th' Twigs' "Rockin' inna Weary World" in Spiral Joy Band's "Wake of the Dying Sun King," and - gosh - Jack Rose's non-participation in Pelt's 2008 Terrastock set was as profound/heavy as any .. biz gesture on display in Robert Altman's Nashville.

a revival of Folk Revival
One of the fetishes of the folk scene is "authenticity."  Some of the figures not fooled into arguing over such stuff was Harry Smith (organizer of what is perhaps the Modern era's most celebrated "mix tape") and John Fahey, a music lover who enjoyed to play (exactly what he did ..).  Any figuring put on Twig Chemistry must surely take into account each member's relationship - real and perceived - with the world of Tradition.  Such critical groping I will leave to other commentators (Danny Fields?).  For illustrative purposes, we might simply contrast the trajectories of Fahey's and honorary Twicker Rose's musical activity.  Fahey would dismiss great swathes of his early career as "sentimental pap," coming around to electricity, to noise.  And Rose?  He emerged from Noise, leveling off into something akin to the earlier, more "rural" Fahaysian sensibility (which is hardly one thing only: consider Jim O'Rourke's Bad Timing beside, say, 1975's Old Fashioned Love.  There is much to ponder, sure !).

Jung suggested in Psychology and Alchemy that we approach the solution to our problem by a spiral motion, a getting closer by walking around it.  I would say .. that the Pickers' connexions/altitudes w.r.t. ROCK are as tortuous - and relevant - as they are with rural tradition.  Illustration: Gangloff says, "This sounds pretentious, but the problem was basically to keep from dissolving into yet another interchangeable rock band.  A turning point came when the band's 'rhythm section' quit and James Connell and I did a show with friend Paul Goode rolling tape loops behind our guitars."  These .. issues with rhythm would (perhaps) come back to haunt him at the 2012 Giles Fiddler's Convention, where he lost the banjo competition to relative newcomer Nathan Bowles (originally BTP's washboard thimbler).
Nesaf ..