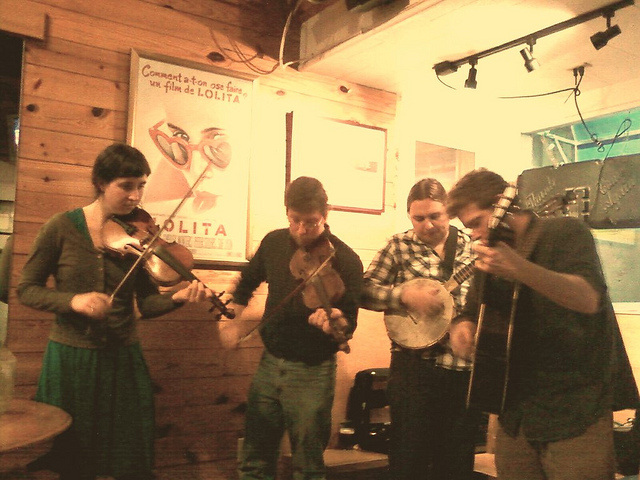 When the otherwise astute Piero Scaruffi dismisses Jack Rose & the Black Twig Pickers as "mediocre" while praising Pelt's work in general, it shows his no-knack of appreciation for nuanced relations, for context.  Make no mistake: BTP derive substantial energy from R_ck Tradition (cf. Hiss Golden Messenger and the "singer-songwriter" one).  If the trio of Gangloff/Howell/Bowles were th' Kinks, Mike would be Danny Kirwan an' Keith Relf, Isak would be Al Jardine .. a-and Nathan?  Mistah Brian Jones.  But the consummate clew and bestgood closer of "case" are those twin releases from 1980 / by Trapezoid, by Figgy Duff.  Of the former - Gordon, Duisit, Reisler & Epstein - James Goodfriend wrote: "What you really have to respond to is the sound of this group: the plinking and plunking, buzzing, sweeping, ringing, droning, and wailing acoustic construction."  And closer still to something like the "mission" of the Pickers can be discovered on the first Figgy Duff LP: "Songs, jigs, and reels they learned from some of the older inhabitants of Newfoundland."  Authenticity?  Do not so much worry: their breakthrough LP Ironto Special is to Old Time what the Stones' December's Kitchen (and Everybody's) was to th' Blues.

The Future
With the prospect of M. Gangloff returning to his Old Kentuckisch Home (or - who knows? - some Hvitramannaland way out West ..), it is time that BTP consider ahead.  One (potential) horizonal outcome foresees the "idea shoes" slowly inflating with burgeoning banjo presence Nathan Bowles (with a side of rhythmetic Howell and - whack for the Daddy O - Mz Sally Anne Morgan).  Complaints?  I did nae think so ..
Nesaf ..