Ralph Berrier, Jr. - We'll list Ralph first 'cause today's young people might, sadly, forget him entire.  A local who prolly growed up listening to Bill Vernon's In and Around Bluegrass program (with one Sunday a month devoted to Old Time !).

Mike Gangloff - Former Rock Critic from the Kentucky flatlands / studied anthropology under Melinda Wagner at Tire Sale U.  Although staged feuds with the likes of Labradford, Kevin Burke, and Frances Simmons failed to bring Pelt the publicity they would've liked, Mike strook gold with an off-cuff remark that found its way back to esteemed youth poet Byron Coley, for whom "hillbilly" was an elastic enough descriptive to cover something like 70% of Americans.

Jack Rose - Never a member of Black Twig Pickers, his individual fame and personal musical path is no small factor when constructing painfully sincere wiseacrings - say, red raspberry zingers with feeling - for this particular contemporary promotional web product.  The ever inscrutable Scaruffi regards Rose as Mike Gangloff's "alter ego" (and - who knows? - maybe Amy Shea as Moina Mathers ..).  Whatever the case, the friendship was an old one, with many stories:  A bicycle messenger in Richmond, VA, Gangloff once ripped through a shallow portion of the James, promptly smashing into a jagged stone with such force he broke both hands and feet.  His friend and fellow stringman Jack Rose remembered a time not long before when Gangloff had almost cut off his hands with a chainsaw and wood chipper in the same afternoon.  "He always lived life on the edge," Rose recalls.

Nathaniel Sobolewski Bowles - A teacher and a leader known professionally as Nathan "teh bettin prayuh" Bowles, you can find him keeping time - or progging out - in a variety of musical environments, in cities up and down the East Coast.  Rock historian?  Sure, maybe .. but this one-man Arkestra II would just as soon swap sparkling insights about Cecil Taylor's legendary Berlin collaborations (1988).

Isak Howell - A genuine renaissance dude, "Spruce Goose" Howell can hold his own on any topic,  from True Crime narrative to the metaphysick of Riley Puckett.  His Ole Miss days of fratting hard far behind him, Isak parcels his time between family and fighting sidhe destruction on behalf of a Lewisburg law firm (Darby O'Gill thanks you !).

Sally Anne Morgan - "a fiddler, flat-foot dancer, square dance caller, and vocalist who lives in Blacksburg, Virginia" (her take on "the Storms are On the Ocean"?  that you should hear ..). 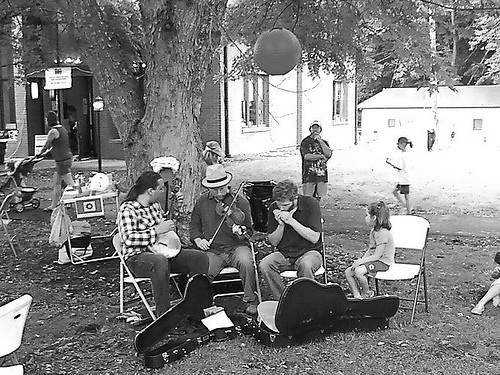